Many people ask me were Vol 3 and 4 are, unfortunately I have to say that these two volumes are not available (yet) due the revealing truth what can shatter ones faith at once as well as the understanding of real history in technology and developments in alchemy if spiritual strength is missing in ones mind.
The truth about these three subjects I reveal in my last two books which gives you the understanding of the first two.
If I was talking b*llsh*t then why are the last two being extremely slowed down?
Number three is the mystery and symbolizes manifestation into the physical while number four is the 4th dimension and equals time which is illusion.

Let me give you a small inside in my writing what some have labeled of having the power to wake you up and to destroy the system you are living in these days.
Let me give you an odd truth of ancient rituals and its medieval secret knowledge gained from a 52.000 year old technology what could create acoustic and magnetic levitation, heal broken bones, gave pharaohs the ability to life up until 150 years and … created many strange looking mythical creatures we know today as cyclopes, mermaids, dwarfs and many more.

(a phrase from Vol. 4)
“For the next ….. pages I will show you how your brain has focused on illusions and how it has put its attention on things its sees as important and relevant to your survival and well-being. 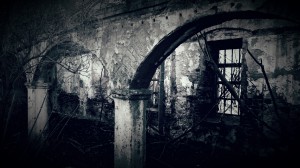 I wrote two books about the knowledge the true Templar’s possessed, a knowledge which is forgotten by many these days. It is not forgotten because of humanity being stupid but by means of the implementation of modern technology which provides us with a BRAIN FOG. Unfortunately, the information vol.3 and 4 are providing the global population (including the visible evidence of an forgotten evolution) is being hold back and are probably already on the black list.

The Holy Trinity Of Our Future selves…4 books about an odd and crazy history having a scary future, YOUR FUTURE! http://nexttruth.com/?p=16320

And once again I had the privilege to obtain some space in the upcoming issue of March of Paranormal Underground.

To many it is a received signal giving a possible indication other life-forms are being present in near solar systems.
But the WOW! frequency is more than that … much more.

Did I wrote dangerous words or just a plausible theory on this topic? … you have to wait until it is published and available.

I like to thank the editors of the magazine for making it all possible.

As far as I can see is the issue is not yet available but to see the previous issues; 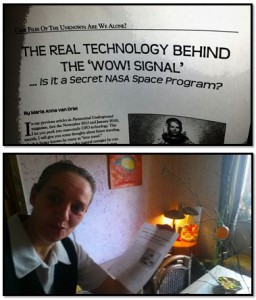 [Top]
[Top]
[Top]
At the moment I am busy writing an article about the Nazi Temple of Doom which I visit February this year.
This castle has my interest for a long time now but not only for the mystical stories which are referring to Himmler’s occult group and technology … also the paranormal activities which are swirling around this castle are highly interesting of which I believe followed me home.
Now the question is …why did it do that?!
The photo below I took in my backyard two weeks after I visit the castle … is it a soldier from WWII wearing a gas mask? 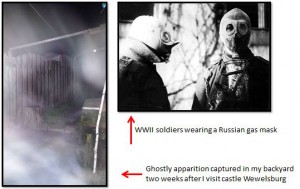