With privacy being one of those hot-button issues now that we’re living in a post-9/11 world, it can be hard to know who to trust when it comes to whether or not the government is collecting data on you. Take this weekend’s development from the DefCon hacker conference, for instance: on the one hand, we have NSA director Gen. Keith Alexander telling attendees that the agency doesn’t maintain files on American citizens, while on the other hand, we have former NSA official William Binney claiming during a panel discussion that the NSA does. Who do we trust in this case? We’re not positive, but it sure does raise a few questions. 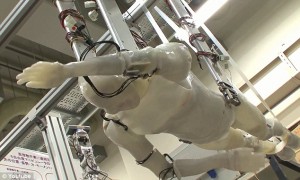 If Japan suddenly sweeps the board with Gold swimming medals at the next Olympics, may we advise spot-checks to ensure the competitors are human?

For a team at the Tokyo University of Technology has created a robot which has perfected the back-stroke – except for the few occasions it goes a bit buggy and tries some freestyle swimming.

The team, led by associate professor Motomu Nakashima, hopes that eventually robots like the ‘Swumanoid’ can act as robot lifeguards, patrolling our shores and helping swimmers in distress.

Apart from life-saving ambitions, Swumanoid is useful in helping research into swimming.

It is difficult to secure motion-sensing pads to swimmers in the water, and it is also difficult for swimmers to perfectly repeat repetitive actions over and over.

Beam me up, sporty! UFO seen amid the fireworks hovering over Olympic Stadium during Opening Ceremony 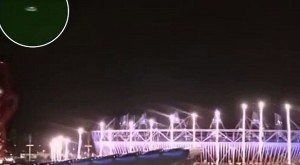 As fireworks lit up the heavens above the Olympics opening ceremony, watched by around a billion people, something else was seen among the whizz-bangs in the night sky… a UFO.

It may have ticked all the cliche boxes – saucer-shaped, bulge in the middle, metallic – but no one has yet stepped forward to explain the slow-moving object.

The incident came right at the close of last Friday’s spectacular at the Olympic Park stadium in Stratford, east London at around 12.30am.

And it was just as Nick Pope, one of the UK’s top UFO experts, predicted only weeks ago – that mass summer events would be a prime time for crafts from other worlds to present themselves to mankind.

German U-boat found off coast of Massachusetts 68 years after being sunk by U.S. Navy

Divers have discovered a World War II-era German submarine nearly 70 years after it sank under withering U.S. attack in the Atlantic Ocean off Nantucket.

The U-550 was found Monday by a privately funded group organized by New Jersey lawyer Joe Mazraani. It was the second trip in two years to the site by the team, some of whom had been searching for the lost U-boat for two decades.

Using side-scan sonar, the seven-man team located the wreck listing to its side in deep water about 70 miles south of Nantucket.

Sonar operator Garry Kozak said he spotted the 252-foot submarine during the second of an exhausting two days of searching.

Kozak said the team asked him if they’d found it, then erupted in joy without a word from him.

The spear of Longinus (spear of destiny)…fact or fiction?

Faith as we know it…is a LIE and created with the astrological knowledge of the ancient Egyptians!!!

Attack of the vampire sun! Astronomers spot binary system where one star sucks the life out of another 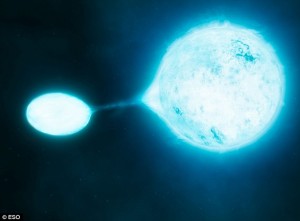 The Universe is a diverse place, and many stars are quite unlike the Sun.

Now an international team has used the Very Large Telescope in Chile to study what are known as O-type stars, which have very high temperature, mass and brightness.

These stars have short and violent lives and play a key role in the evolution of galaxies. They are also linked to extreme phenomena such as ‘vampire stars’, where a smaller companion star sucks matter off the surface of its larger neighbour.

‘These stars are absolute behemoths,’ said Hugues Sana, from the University of Amsterdam, Netherlands, who is the lead author of the study.

‘They have 15 or more times the mass of our Sun and can be up to a million times brighter. These stars are so hot that they shine with a brilliant blue-white light and have surface temperatures over 30,000C.’

Canadian researchers have created an insect robot that can walk, and even jump, on water

It is the tiny robot that can do something astonishing.

Canadian researcher today showed off the incredible tiny machine inspired by an insect.

Like the water strider it was based on, it can walk on water – and even jump, all without sinking.

Scientists at the University of Waterloo revealed the ‘agile microrobot’ in the journal ACS Applied Materials & Interfaces.

They say it could its jumping ability to avoid obstacles on reconnaissance or other missions.

Using porous, super water-repellant nickel foam to fabricate the three supporting and two jumping legs, the group made a robot that could leap more 14cm high and 35cm forward, despite weighing as much as 1,100 water striders. 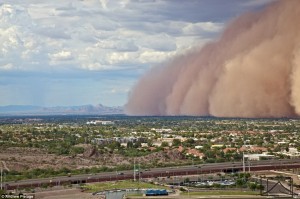 More familiar to the desert of Saharan Africa, the first massive dust cloud of the year has engulfed the city of Phoenix cutting off power to 9,000 homes and closing the international airport for 20 minutes.

Known as a haboob, which is Arabic for ‘strong wind’, the storm’s yellowy grey dust cloud was traveling at 35 mph, was around 2,000 feet tall and almost 100km wide.

Caused by Arizona’s monsoon season which begins in early June and runs through till the end of September, haboob’s only occur in Africa, the Middle East, Australia and Phoenix, Arizona.

Known as the granddaddy of dust storms, the haboob is a rare event and is caused by loose dust being blown upwards in the absence of rain and collecting skywards where it is then propelled by another more distant thunderstorm brewing behind it.

Despite some of the 1.5 million residents of Phoenix objecting to the term haboob being used, meteorologists in the city confirmed that they have been using the Arabic word to describe the massive dust storms for over 30 years.

The dog who was cloned after his grieving owners could not bear to say goodbye has become a dad.

Lancelot Encore fathered eight pups born to a Labrador bitch – which are now being offered to the public.

The birth means that saga of Sir Lancelot – Lancelot Encore’s own ‘father’ – continues to a new generation.

Owner Nina Otto, from West Boca in Florida, said she was ‘tickled pink’ that the babies had arrived naturally, although the mother was artificially inseminated.

She has set up a website labraclone.com which offers ‘future pups from the past’ and will use it to sell seven of the puppies which are a mixture of cream and fox-red coloured.

Mrs Otto however declined to reveal how much they would cost.
She said: ‘I am keeping one and we are hoping to find good homes for all the other puppies.’

Mrs Otto explained that she paid a few thousand dollars for a lab to inseminate the female Labrador, who is called Scarlett. 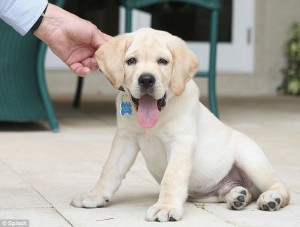 Lancelot Encore was the first commercially cloned pet and his owners paid $155,000 for the service

Now that all the fanfare over the sighting of a Higgs-like boson in the Large Hadron Collider has died down, CERN scientists have a few burning questions about the spotted particle.

The gigantic proton accelerator will be shut down this year, but physicist Paris Sphicas told The Register the boffins should be able to gather enough data about the particle’s properties to tackle two of their conundrums before the big switch off.

For those still baffled by last month’s discovery, the proposed Higgs boson helps explain how everything around us actually exists: its own existence suggests that the Higgs field is real and that particles moving through this omnipresent field gain mass. The boson is therefore vital in propping up the Standard Model, which is modern science’s least incomplete explanation of how the universe works.

However, although the Higgs field in theory gives everything else mass, it doesn’t appear to be giving mass to the boson itself, a mystery that can only be answered with further study of this Higgs-like particle.

In order to confirm the spotted Higgs-like boson is the sought-after elusive elementary particle, it has to have certain properties, such as what particles it decays into and how often it decays into specific particles.

Was the Large Hadron Collider (LHC) a test for a Teleportation project? 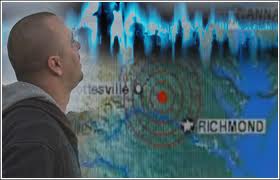 Mysterious booms that plagued several towns in Wisconsin earlier this year appear to have returned, with an eyewitness reporting hearing the strange noises repeatedly over a 30 minute period last night.

The booms, described as a rumbling noise coming from deep underground, stoked intrigue earlier this year and a US Geological Survey investigation after being reported over several weeks in the town of Clintonville. The strange noises were also heard and felt in Baraboo and Montello.

The USGS eventually concluded that the booms were caused by an unusual “swarm” of earthquakes that hit a region not noted for its seismic activity. However, a separate seisometer study conducted when the booms briefly returned following the conclusion of the USGS inquiry found that the sounds were not being caused by earthquakes.

Did they turned on HAARP?

Is the NASA (Lockhead) responsible for the HUM?