Good day everyone, YES! … it is that moment in time again in where the magazine of Paranormal Underground has published a new issue 🙂 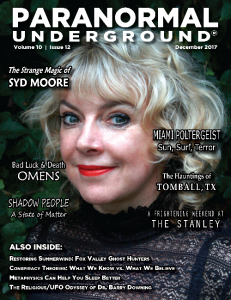 A shaman’s interaction with spirit, how beliefs shape conspiracy theories, and bad luck/death omens are some of the interesting topics the issue of December is covering.

Also, don’t miss out the article ‘The Fourth Kind’ … what describes the strange nature of black shadows mimicking the living.
Looking at this creepy paranormal phenomena in a scientific manner, it makes it even possible for an ancient nation giving birth to such creatures and its evolution due a process what is known as Alpha-decay … a creature what became known over time as … The Shadow People. 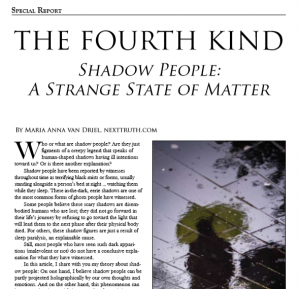 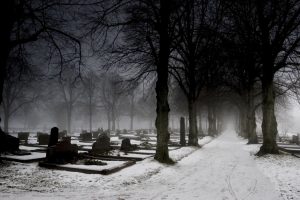 https://youtu.be/1-Xv_X0kgBw (wait for 30 seconds than read the story)

The pristine white snow creaks underneath his black shiny shoes while walking up to his car.
The feeling of a sad hesitation overwhelms him for a few seconds, “I am sorry my dear, but I cannot stay.”

He lays his leather gloves neatly on the dashboard in front of him as he always does.
Gazing at the fluffy white snowflakes swirling down on the windshield of the car, his mind wonders off, “Why does it have to be like this?” he whispers.
A tear is blurring his vision still; he can see how a thick slumbering fog is slowly crawling towards the car.

It all happened so fast; a loud female voice screaming his name, the sound of grinding brake discs during the emergency stop, the strange feeling of a delay in time when the car made several rollovers.
The next clear remembrance is that of the stressed voices of medical personal while gathering around his wife and police-officers being occupied with securing the area.
The screaming, yet almost unrealistic, sound of tearing up the metal as the fire brigade was cutting open the car wreck, is still echoing in the back of his mind.

All felt as a dream within a dream as he watched the brancard his beloved wife was lying on, was being carefully but with haste carried inside the ambulance.
In the distance he heard a male voice vaguely pronouncing his name as he felt a solid and tasteless object was being pushed into his throat what made it impossible for him to speak.
Watching a man wearing an oversized yellow outfit holding a bag of clear liquid up in the air, a feeling of silent solitude but not loneliness, was rising as his body was lifted up.
His head slowly slides backwards into a soft pillow while the people around him started to move in slow-motion.
Suddenly a tingling sensation emerged in his chest; “Felicia!” he screamed but no one responded.

Today it is exactly one year that this horrible accident has occurred.
Every single day he went to the grave hoping he might catch a glimpse of his beloved wife, to hear her tender voice again.
From the deepest depths of his soul, a burning sensation rose behind his eyes, and sprang as a crystal clear tear telling the story of a heartbroken man.
“If only I could tell you just one more time that I love you, if I had only some time to bid you farewell,” he muttered while wiping the almost frozen tear from his cheek, “Oh Felicia, how I do miss you.”

He makes one last nod towards the grave standing in silence on the hill top and reads the, in the tombstone carved, words;

Those we love don’t disappear from life; they walk beside us every day.

I’ll always carry you in my heart,
for always your wife, Felicia.

He then starts his car and taps the wiper handle that sweeps away the fresh snow from the windshield.
Almost inaudible, the car slowly drives towards the gates of the cemetery where it disappears into a slumbering fog … riding the universal valleys of the hereafter.