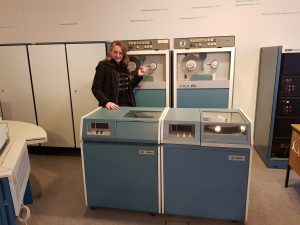 Where do we come from? Was there more before the Big Bang? How does our experience of time develop?

2014…that was the year, I become really in touch with my inner nerd due the teachings of the myriad scientists that I was working with. As I started writing as a science journalist I experienced a bit of what it must have been like to be Alice in Wonderland. And I was scared, really scared! I was scared of these super intellectuals with their big brains, their big books and their big, unfamiliar words. But as conversations and interviews unfolded, I experienced what Alice must have when she went down that rabbit hole and saw that door to a whole new world that was, and still is, playing with my curiosity. That is just how I felt as I had those conversations with these open-minded scientists. I was amazed at the ideas that they had, and I wanted others to experience this wonderland as well.
I believe the key to opening that door is great communication.

Good day, my name is Maria Anna van Driel the founder and owner of The Next Truth Magazine and… I am interested in YOUR STORY!  I am a Freelance Investigative Science Journalist & Reporter (published in Germany, the Netherlands and USA), a published Author & Writer (books, articles and short stories), a Foreign Correspondent (PU Radio) and Theoretical Physicist  having e.g. a MA in ancient Alchemy and a BA in Metaphysics … my personal  interest include among others Mythology, Medieval and (pre) Egyptian symbolism, Quantum-, Plasma- and Optical Physics.

I aim to cover non-fictional stories of the everyday reality by peering behind the screens of many Universities, Institutes and Research Groups, in where Scientists and Citizen Scientists are the point of focus. When combining modern scientific research findings with e.g. mythology, theology and local folklore, a big adventure is starting to rise in where some new knowledge and plausible answers to questions can bubble up in what for the majority is better known as, ‘The Unexplained’.

“I am Covering Science-Fact, Not the Illusion.”

Yes… true… It is being said by some that thanks to the efforts of literally thousands of scientists, we no longer have faith (in paranormal events) what makes it – sometimes – a scary and difficult threshold to go in conclave with a journalist in general. But now more than ever, we need scientists who are prepared to break the silence…to set neutrality and the fear within, aside.

Journalists and Scientists have different roles, but they share a goal — an informed public! Like you as a scientist, we are simply searching for the truth! It is our job to translate the complex research findings of your intriguing work and inform the general public, in an understandable language.

This search for knowledge is in my genes, our genes…in the genes of mankind globally! …and it is never going to be quenched.

So… let us science journalists, help to open that door to the wonderland that is science. Let us take your science, subtract your bullet points and your jargon. Let us divide it by relevance, share with the world what is relevant, and multiply it by the passion that you have for this incredible work that you are doing. And that is going to equal incredible interactions that are full of understanding having the prospect of plural pleasant collisions in the transfer of comprehensible science with the general public.

We need you… the world needs you … badly!

A note to the side; For those who are willing to let their imagination roll, there is a glimmer of hope in at least one place.
It is where space, time and the nature of existence itself meet inside the biggest and most complex machine ever created by man.
It is the newest tool used in physics called The Large Hadron Collider having the role of studying the frontier of physics.
A machine that is expected to fill in the blanks and maybe one day will lead us to new laws of physics…

Now whether one is looking for a scientific explanation concerning the unexplained or not, science doesn’t explain or debunk neither ones experience nor ones faith, it helps to understands how real the unexplained is … and even it is being a rare phenomenon, it’s more real than most people think it is.

“Brilliant Scientists are open-minded…So why not you?!”

Keep an open mind and look beyond the point of focus because there IS a criteria for the plausibility in truth!