We tend to think that evolution is a smooth line of changes in the characteristics of a species over several generations and relies on the process of natural selection. This, by the majority, accepted theory of an almost vivid and detailed description of human ascent from a tiny, one-celled monad is so convincing that one could almost believe science has seen the microscopic amoeba turn into a man with their own eyes. But does the theory of evolution merit a fanatical support, which would silence all opposing ideas?

Within every human being are 46 chromosomes containing an estimated 100,000 genes, each one of which is able to affect in some way the size, color, texture, or quality of the individual. The assumption is that these genes, which provide the inherited characteristics we get from our ancestors, occasionally become affected by unusual pairing, chemical damage, or other influences, causing them to produce an unusual change (mutation) in one of the offspring. I wonder if the 2 billion-year-old nuclear reactor in Gabon, West Africa, called the Oklo fossil reactors, could have had any influence on some of Mother Nature’s creations and started a new line, or lines, of species as they first fired themselves up.

However, scientists like Darwin, conceded that most mutants are recessive and degenerative; therefore, they would actually be eliminated by natural selection rather than effect any significant improvement in the organism. The theory of evolution on the other hand is based on the idea that all species are related and by natural selection, first formulated in Darwin’s book “On the Origin of Species” in 1859, and speaks of a process by which organisms change over time as a result of changes in heritable physical or behavioral traits.

In biology, evolution is the change in the characteristics of a species over several generations and relies on the process of natural selection. Natural selection can change a species in small ways, causing a population to change color or size over the course of several generations. This is called “microevolution” but natural selection is capable of much more. Given enough time and enough accumulated changes, natural selection can create entirely new species. It can turn dinosaurs into birds, amphibious mammals into whales and the ancestors of apes into humans. Indeed, understanding evolution is important and helps us solve biological problems that impact our lives.

But leaving aside the exquisite complexity of biologically evolved organisms, it does seem to be true that the Earth creates less complexity than its human inhabitants and should evolution, as it is known by many, be a ridiculous improbability. How does the evolutionist explain the existence of that first one-celled animal from which all life forms supposedly evolved?

The universe had to cool down in order to give birth to life as we know it today.

For many years the medieval idea of spontaneous generation was the accepted explanation what is supposing the production of living organisms from non-living matter, as inferred from the apparent appearance of life in some supposedly sterile environments. According to Webster, spontaneous generation is “the generation of living from nonliving matter from the belief that organisms found in putrid organic matter arose spontaneously from it.” Simply stated, this means that under the proper conditions of temperature, time, place, etc., decaying matter simply turns into organic life.

The first serious attack on the idea of spontaneous generation was made in 1668 by Francesco Redi, an Italian physician and poet. Nice try Redi but a waste of time because this simplistic idea kept dominating scientific thinking until, in 1846, Louis Pasteur completely shattered the theory by his experiments and exposed the whole concept as utter foolishness. Many scientists saw Redi’s “deathblow” to this theory of spontaneous generation by proving by experiments that life comes only from previous life, as a perfect window of opportunity to explore the origin of the human species further.

Over time, Charles Darwin became almost universally thought of as the father of evolution but it was a British naturalist, explorer, geographer, anthropologist, and biologist who had written the revolutionary idea of evolution by natural selection entirely independently of Charles Darwin. Although the theory what was proposed by Charles Darwin in “On the Origin of Species” in 1859, Alfred Russel Wallace should be as famous as Charles Darwin for discovering that species “evolve” but his name became overshadowed by Darwin’s. Alfred Russel Wallace played an important, even pivotal, role in discovering and developing the theory of natural selection.

Wallace, unlike Darwin, took one step further outside the box of, for that period in time, accepted science by saying that the human soul is not the product of evolution. 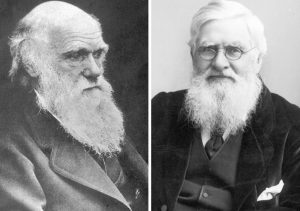 Still, let us not only judge Alfred Wallace by the impossible standard of competing with Darwinian immortality. Judged on his own merits, he had an impressive career and left a substantial legacy. Most problematic for scientists like Darwin was Wallace’s belief that while this natural experimentation shaped the body – there was something divine about the mind, the soul. Such spiritualism was too loopy for rationalists. But Wallace integrated his radical politics, deep spirituality, bold ingenuity, and admirable nobility. So, in the summer of 1865 Wallace began investigating spiritualism, possibly at the urging of his older sister Fanny Sims, who had been involved with it for some time. After reviewing the literature on the topic and attempting to test the phenomena he witnessed at séances and came to accept that the belief was connected to a natural reality. For the rest of his life, he remained convinced that at least some séance phenomena were genuine, no matter how many accusations of fraud sceptics made or how much evidence of trickery was produced. And even these two gentlemen did not agree on some points in their search for the origin of the human species, the two opponents had a point. Evolution was subversive. On November 7, 1913, Wallace died at the age of 90.

155 years after the publication of the theory of evolution, science picked it up again in 2013/14. A group of scientists came together in a lab and used a powerful laser to re-create what might have been the original spark of life on Earth.

They zapped clay and a chemical soup with the laser to simulate the energy of a speeding asteroid smashing into the planet. They ended up creating what can be considered crucial pieces of the building blocks of life. Unfortunately, their findings did not entirely prove that this is how life started on Earth about 4 billion years ago but the experiment does bolster the long-held theory in evolution. 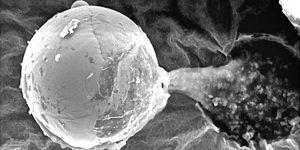 May I suggest to you a theory what speaks of an evolution that has the prospect of being rejected with the same speed as I am writing it? Imagine a, slightly different to ours, solar system just beyond the borders of our own universe. This solar-system has a bright star what provides the required heat for subatomic particles to emerge which in turn create the basics for atoms after they bound. Also, planets, moons and even black holes can be found in this, by us, unseen solar-system containing to us strange life forms. Let us also imagine that the borders of our universe are not a straight line which science can calculate but is presenting itself as a wobbly and moving X-point…better known as a wormhole or EPR.

This alien solar-system swirling in a neighborly universe contains the same basic building-blocks as can be found in our universe but are slightly different in, for instance, their spin and energy charge and/or density. All these extraterrestrial subatomic particles are starting to accelerate when being vacuumed into the mouth of a black hole and pressed more and more together as they are entering the narrow tunnel of this wormhole behind the black hole what in turn is creating a tremendous heat. Hum, think of 200 human beings who all want to exit, or enter, a room at the same time but this room has only one entry and it is not bigger then 2 meters wide. This large crowd is using all kinds of maneuvers as it tries to squeeze itself through this narrow entrance in order to enter, or exit, the room what is creating friction, chaos and aggression which in turn create heat.

By means of the friction, in this theory this occurs by the spin of the particles when they meet instead of collide, a strange kind of heat is created and when a particle is more aggressive (electrical charged) then its fellow particle, it could produce a kind of sequence in uncountable little illuminated explosions (EM-Photons?).´
Keeping in mind that this is still a hypothetical proposition, this inaudible explosion can be a plausible answer to what we see happening on the other side of the wormhole (white hole) and gave this galactic event the name Red –Shift or maybe even…the Big Bang. 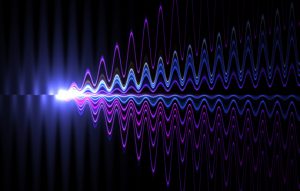 Now like those 200 screaming and yelling human beings trying to squeeze themselves through that narrow doorway, subatomic particles possessing different spins, speed, weight, are acting in a similar manner when putting together in a closed jar. Unscrew the lid and… BOOM! The only question in this event is; what caused the particles to spin in the first place? The friction…the explosion of this particle cocktail…is tachyon created by the spin of the known particles? Or did life sprang up spontaneously from no previous life and thus contradicts with the basic law of nature that forms the foundation of the entire theory? Is there truly a, yet unknown to science, spooky particle what inhabits our universe having a tremendous impact on our evolution?

Are we ourselves this alien life form we so desperately trying to contact?