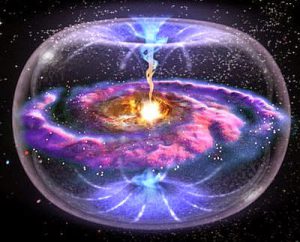 In the beginning there was only darkness and then…BANG! …an endless expanding of the existence of time, space, and matter.
Everyday new discoveries are unlocking the mysterious, mind blowing and dangerous secrets of a place we call … THE UNIVERSE.
Then, in 1905, Albert Einstein published his theory of Relativity what makes time-travel an open question.

And today we are convinced being truly familiar with the modern way of communication. But have you ever asked yourself the question of how we become to know whatever it is we know? How it is a supercomputer we call ‘our brain’, could even extend outside the realm of everyday reality by gaining this information and altering it mathematically in an understandable concept for us to form an image with sometimes a crazy form of density? Information what had the chance to devolve into a controlled and synthetic form creating quantum holograms! I bet you never did, I bet you just accepted this most complex form of transmitting information as an uncomplicated short distance language. But did it ever occur to you that this information, hitting the neurons in your brain, (light-by-light scattering) could have come from a far more remote place? Hearing the word ‘remote’ you probably assume that it is speaking of enormous distances like miles, kilometers or even as big as lightyears but remote in this can also occur in a subatomic scale.

A Ph.D. from the CERN explains; “We are creating high energy densities by colliding protons which are similar to the very early universe. Therefore the cosmologists are interested in the results because they get now points of physics results for a moment they cannot observe by looking in the stars. The cosmologists have additional points of the universe depending on the energy of the collisions and from that they can exploited the history and the models they have for the developments of the cosmos. This is very interesting because here the smallest scales and the larger scales, meet. And this is, in my point of view, so interesting about physics because it has to cover the veriest small scales up to the largest scales.”

Now listen to the 56 minute YouTube version of a lecture from Apollo Astronaut and founder of the Institute of Noetic Sciences – Edgar Mitchell ‘Quantum Holograms and remote viewing’, it will give you an even better understanding about this crazy form of absorbing information on smaller scales and how it is possible for your brain to communicate with for instance a drop of blood or a strain of hair. 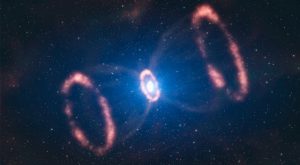 One of the secrets in this are standing waves better known by many as nothing is happening at all. Skipping the data and complex mathematical equations in e.g. PCAR, it appears the brain may be using these crazy fields to communicate without synaptic transmissions, gap junctions or diffusion. An example; somewhere in your 3 & 4D surrounding there is an object shining like a bright light but you can’t see it clear due a misty cloud swirling in front of the object. Think of this mist as a vibration creating a distortion in the visible spectrum.

This is how the majority of the world population is looking into the world … they know it’s there but can’t see it clear. Unfortunately this also creates an effect of some people mocking others due their personal rejection of scientific proven behaviors and reactions of e.g. particles and waves carrying information as it is demonstrated in hyper-entanglement. (A term in Quantum Physics for slicing up and entangle each photon pair into multiple dimensions allowing each photon pair to carry much more data.)

Experiencing any effect in this natural phenomenon like for instance knowing something you could not have known, is not you being or getting crazy, your build-in supercomputer is, like radar if you like, communicating more clearly with its surroundings.

When both waves, from the brain and the bright object, are interfering they form still waves for you to see through the mist what makes the light of the object hitting you as clear as can be. Even it was thought by science as a big no-no for over 75 years, this effect is real and happening!

The eerie part in this is, these particles involved in high-energy interactions, can defiantly interact with a biological system such as that of a human … faint but still. Most of these interactions are happening through electromagnetism, especially at low energies. (Human Energy Field or Aura)

Now as I said earlier, the brain has the possibility to transmit a wave what is similar, but in the opposite, to the one coming from behind that misty cloud creating a distortion in the visible spectrum. Now think of the following … creating a clear image of what is behind the near distortion, a still wave is necessary for you to see it. But what if we are talking about an object that is that remote you have no possibility of seeing it at all, meaning on a subatomic scale. 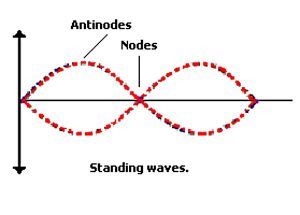 “The transmission of information, in Hyper-entanglement, creates holographic images when the nodes of a charged standing wave contain vacuum due magnetism.”

Well, you have to create an immense high energy what is not so easy to create with the natural weak and unstable brainwaves. It is also not enough to have energy to spread out over a large region; it has to be concentrated in a specific and small region. (Think of e.g. remote viewing in where you aim your energy on one particular object, person or situation) High concentrated energy like this has also the capability to create spontaneously new particles … and as some of you know, energy can create mass. (Similar effects in creating new particles, we see at the CERN during some collisions)

Now what IF you could use this kind of Standing Wave to create bigger time-tunnels (wormholes) and build a bridge for information to travel through space by increasing the frequency of that wave (or waves) in which the node-points are starting to become visible and touch eat other. A point in where no time and no energy as we know it, exist … does this sound familiar to you?
To most people this will sound like ‘The Hereafter’ in where the energy of the soul has lost track of time as well as the perspectives of space. To me it sounds like Einstein-æther theory, which is a generally covariant modification of general relativity which describes a space-time endowed with both a metric and a unit time-like vector field.

So there is a possibility of traveling through time only not in a manner you thought it would be! Using sound waves, or in this case almost undetectable points in standing waves which can create a crazy place in where time and space, as we understand it, do not exist anymore, gives us a possible opportunity to open a cosmic connection to remote places by bending the ‘arrow of time’.