Some will be skeptic and say this is all crazy talk, some will say it is plausible while others say it is a fact, but regardless what you believe, the effects of a natural phenomenon in transmitting information like so … can be felt and received!

“Brilliant Scientists are Open-Minded, so Why Not You?”

Warwick’s physics Professor and Ph.D. Bill Murray explained during an interview I had with him concerning e.g. project ATLAS, black-holes and plasma’s; “We know there is much we do not know, and the discussion of discovering black holes or even time-tunnels was not impossible – just rather unlikely. When you are pushing beyond what is known it is right to be excited. When you are claiming a discovery it is right to be cautious. Our best theory of quantum gravity, string theory, requires these extra dimensions, and even the old general relativity seems to allow time travel! But it has to be done responsibly … we should not conjure up an expectation of such things, just a faint possibility.” 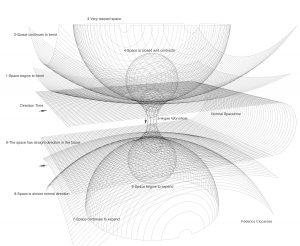 “Electromagnetism does affect space-time, but not in the way that you suggested or … expected!”

Is it really just a faint possibility? What if we think of the idea the universe transmitting information due an effect in hyper entanglement and using the nodes of a standing wave in order to create its own survival system in where it evolves? If so, we can almost say, the universe is possesses a strange form of intelligence.

One of the most well-known ideas concerning wormholes (time tunnels) was born around 1935 due Albert Einstein’s theories in where he and his colleague Nathan Rosen realized that the general theory of relativity allowed the existence of bridges that could link two different points in space-time. Theoretically these Einstein-Rosen bridges, or wormholes, could allow something to tunnel instantly between great distances but they are extremely tiny, a so-called space traveler wouldn’t fit.

During a private conversation with a Ph.D. from the CERN, concerning time-tunnels; ”No they are not observed here. We have not seen any event in were big energy has escaped…we are looking for them of course but haven’t seen them.”

However, time-travel has defiantly a reality when we look at the Einstein-Rosen Bridge’s, something what we better understand as e.g. telepathy; a remote mind to mind communication due aiming high energy, sound- and magnetic waves in a specific and small region what the brain can receive and translate into images, words, and sometimes even as an emotion. This natural phenomenon, which is not fully understood yet, is being described as having no scientific evidence that this ‘power’ truly exists and has been labeled as pseudoscience for a long time … but it is more fact than it is fiction.

Questions like; how real are these so-called ‘doors’? … Can we truly walk the grounds of what once was? … What will peer back out of these dark shadows from the past? Is it possible to create a similar effect with brainwaves?, are frequently asked.

Well if so, this phenomenon will have to bear the terms like ‘Visualization’, ‘telepathy’ or ‘remote viewing/sensing/healing’ as well as transparent ‘ghostly appertains’ can be projected by an effect in a holographic duality and strange black shadows due infra-sound as Vic Tandy discovered.

Many will think of it as science-fiction still time-travel was already discussed by e.g. Einstein, Bohr, Tesla, and Schrödinger. This was/is known as e.g. ‘the aether theory’ and today explained as THE HEAVENS in religion, a place in where the fourth state of matter (plasma), known as ‘echo-plasma’ in the paranormal world, rapidly arises as it is vaporizing.

It is being said by some that thanks to the efforts of literally thousands of scientists, we no longer have faith in paranormal events.
But science doesn’t explain or debunk neither ones experience nor ones faith, it helps to understands how real the unexplained is … and even it is being a rare phenomenon, it’s more real than most people think it is.

And for those who are willing to let their imagination roll, there is a glimmer of hope in at least one place. It is where space, time and the nature of existence itself meet inside the biggest and most complex machine ever created by man. It is the newest tool used in physics called The Large Hadron Collider having the role of studying the frontier of physics. A machine that is expected to fill in the blanks and maybe one day will lead us to new laws of physics that will help us determine if time-travel is at least possible.

Many physicists working in the projects of the CERN believe, as can be read in the interview of Warwick’s physics Professor and Ph.D. Bill Murray, these understandings, as well as the answers they need to fill in these blanks, are right around the corner.
On the other hand, it could be that this problem is in fact harder than though to be and that human civilization does not live long enough to figure out how it works.

Now whether one is looking for a scientific explanation concerning time-travel or not, we all dream about literally walking through time once in a while. Some prefer to participate in the daily activities of the residents of Pompeii, some would like to listen to a speech of Julius Cesar, and others would like to take a peek into the future.

Will we ever use electromagnetic plasma (also known as electron clouds) as a doorway and connect two distant regions in the universe? And has the bio-suit of MIT undergone enough progress to offer a positive result in this?

Will we ever walk the fabrics of time?