“In the January issue of The Next Truth we spotlight the personal experiences of ATLAS Higgs convener Prof. Dr. Bill Murray who was right in the center of the Higgs-boson discovery in July 2012, SETI’s Institute’s weekly radio show “Big Picture Science” in where the host Senior Astronomer Dr. Seth Shostak reveals his thoughts; “Are we truly earthlings?” and… peer into the personal thoughts of Dr. Anindita Bhadra concerning the position of the female scientist.
Also in this issue; Max Planck IPP’s research for a future fuel in plasma’s, a scientific theory of “The Fourth kind” and the introduction of shaman Tony Damian. Michael Murawski weighs in on the German ghost ship “The Renabau”, spiritual coach Jacquelyne Ellis on animal energies in a multi-dimensional universe and author Lynn K. Russell makes an amazing connection between quantum physics and Global Consciousness.”
http://www.magcloud.com/browse/issue/1552089 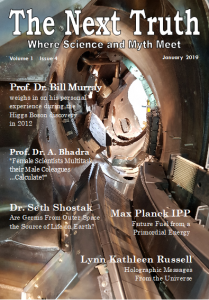 Four years ago, I become really in touch with my inner nerd due the teachings of the myriad scientists that I was working with. As I started writing as a science journalist I experienced a bit of what it must have been like to be Alice in Wonderland. And I was scared, really scared! I was scared of these super intellectuals with their big brains, their big books and their big, unfamiliar words. But as conversations and interviews unfolded, I experienced what Alice must have when she went down that rabbit hole and saw that door to a whole new world playing with my curiosity. That is just how I felt as I had those conversations with these open-minded scientists. I was amazed at the ideas that they had, and I wanted others to experience this wonderland as well. I believe the key to opening that door is great communication.

The general public is desperately in needs for great communication from our scientists and engineers in order to change the world. These supper-minds are the ones that are tackling our grandest challenges, from energy to environment to health care, among others. But if the public does not know about it and does not understand it, then the work is not done. I believe it is our responsibility as science journalists, to have these interactions. It is our task to blunt the jargon, which is a barrier to many, into the understanding of progressive ideas and groundbreaking experiments in new science, and invite the general public into the wonderland of science.

Science journalists are making these ideas accessible to the general public which is not the same as dumbing it down. Instead, as Einstein said, “Make everything as simple as possible, but no simpler.” Describing the accelerated thoughts of our scientists by using single and readable sentences the audience can key into if they get a bit lost in the complexity of scientific research findings, is the key role of science journalism.

The December issue of The Next Truth is online!
I hope you enjoy this month’s issue 🙂

In the December issue of The Next Truth we spotlight the realm of neuroscience and anxiets in an interview with worlds leading neuroscientist and Harvard Medical’s most prescient innovator, Dr. Srini Pillay, learn more about WISIB with GYA alumni and cofounder and the founder of WISWB Prof. Dr. Amal Amin and leap into multiverse with Dr. Brian Keating.

Also in this issue; the scientific evidence of the phenomena of EVP’s, Thomas van Brunschot and Joseph B.H. McMillan discuss the existence of God, UK’s Dimensional researchers Nick and Andy drawing back the curtains on their research and author Lynn K. Russell speaks of a remarkable experience at a motel in Minnesota. 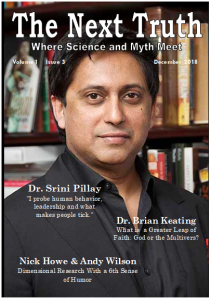