In the March/April issue of Young People Science several renowned scientists are letting you curl up on the couch with your favorite soda and a bag of potato chips while they take you on an incredible journey through “Human History”.

But you can also take a real fun quiz about Neanderthals, drive your parents crazy while following the instructions of how to build a bubble-powered rocket in the kitchen 👩‍🚀, read crazy facts about medieval castles and much more.

So fasten your seatbelts as you are about to step into an adventurous journey to the era of ancient Egyptian with the world-renowned Archeologist and Egyptologist Dr. Zahi Hawass 🤠, learn from Prof. McAndrew why it is that we love blood-curdling screams 😱, and hear from Prof. Frederick L. Coolidge & Prof. Thomas Wynn how dreaming has changed human evolution, among others.

Ask your parents for you to purchase a PoD or digital version of Young People Science and share it with your teachers, parents, nephews, nieces and/or children from your neighborhood. Because, history is FUN!

Click on the link above, hit the ‘FOLLOW’ button as hard as you can and never miss an issue of “The Next Truth: Young People Science” 😃

The Next Truth is advising you to fasten your seatbelts as you are about to take several astonishing journeys through space and time with well known scientists from all over the world who are challenging you to blaze away the curtains of what is known about this fear containing feast of Halloween, creepy gothic buildings, the taboo of speaking about dead and the mysterious African Nomoli figurines. So lock the doors, dim the lights and do not be scared as this month’s contributor’s dig up some of the real stories behind Halloween. https://www.magcloud.com/browse/magazine/1512517

In the October issue of The Next truth we take an astonishing journey to an ancient time with expert Bennett J. Vonderheide who shines a bright light on the mysterious African Nomoli figurines, Germany’s time researcher Dr. Marc Wittmann challenges you to blaze away the curtains holding this taboo of speaking about dead, Dr. Neil Dagnall and Dr. Kennett Drinkwater present with you surprising but eye-opening scientific research results about what poltergeist really are, Prof. Linda Saab and Prof. Arash Javanbakht are dismantling the blood curdling science of why we love to be scared and Prof. Bill Murray is finally revealing who this hooded figure is in his chilling science-fiction story.

Also in this issue: Author Benjamin Radford is targeting the possibility of the paranormal, Ass. Prof. Tok Thompson is debating the question if believing in ghosts can make you a better person, Dr. Peter Lindfield entrance the realm of Britain’s enviable Gothic architecture what seems to have dark reputation, Prof. Ashby Kinch explores the cultural and historical traditions of a medieval era in where the dead gained a more active role in our daily lives, Dr. Evelien Bracke is fades the boundary between our world and the spirit world by teaching us about the spellbinding magic practiced by the ancient Romans and Greeks to ward off or appease evil spirits roaming the earth around All Hallow’s Eve and Dr. Maria Avxentevskaya let us discover a much earlier era in where the desire of traveling into space did had a grip on people’s minds as well as the inventions of shiny metal shapes gliding in the vastness of the universe were not to be considered an opaque option. 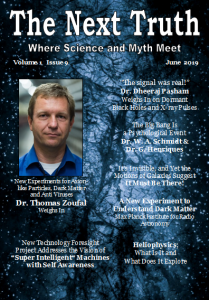 In the June issue of The Next Truth; together with Dr. Thomas Zoufal we explore the Light-Trough-The-Wall experiment, Dark matter and advanced Speed Machines. Prof. Waldemar Schmidt and Prof. Gregg Henriques are setting our minds on a quest to come to know if the Big Bang is a psychological event, Prof. Krystine Batcho is discussing if nostalgic memories are the ghost of our past or it they are can be considered as the future memories of our lives and Dr. Dheeraj Pasham leads us along dormant Black Holes and X-ray Pulses.

Also in this issue; Researchers from Spain and France explore the physics of beer tapping, we hunt down the ripples in a mysterious and invisible source what is fine-tuning our universe, the Karlsruher Institute of Technology presents its latest progress in Artificial Intelligence with self-awareness, the Max-Planck-Institut for Radioastronomie speaks of a new experiment in how to understand dark matter interacting with standard matter and we take a quantum-leap into Helio-physics.

Many thanks for hitting the ‘like’ button and following The Next Truth via MagCloud. http://www.magcloud.com/browse/issue/1619676

The June issue of The Next Truth is available online!
http://www.magcloud.com/browse/magazine/1512517

In the June issue of The Next Truth; together with Dr. Thomas Zoufal we explore the Light-Trough-The-Wall experiment, Dark matter and advanced Speed Machines. Prof. Waldemar Schmidt and Prof. Gregg Henriques are setting our minds on a quest to come to know if the Big Bang is a psychological event, Prof. Krystine Batcho is discussing if nostalgic memories are the ghost of our past or it they are can be considered as the future memories of our lives and Dr. Dheeraj Pasham leads us along dormant Black Holes and X-ray Pulses.

Also in this issue; Researchers from Spain and France explore the physics of beer tapping, we hunt down the ripples in a mysterious and invisible source what is fine-tuning our universe, the Karlsruher Institute of Technology presents its latest progress in Artificial Intelligence with self-awareness, the Max-Planck-Institut for Radioastronomie speaks of a new experiment in how to understand dark matter interacting with standard matter and we take a quantum-leap into Helio-physics.

I hope you enjoy this month’s issue.

DESY is one of the world’s leading accelerator centres. Researchers use the large-scale facilities at DESY to explore the microcosm in all its variety – from the interactions of tiny elementary particles and the behaviour of new types of nanomaterials to biomolecular processes that are essential to life. According to the latest publications of DESY; “New study in Dark Matter may explain distribution of dark matter in galaxies” www.desy.de/index_eng.html 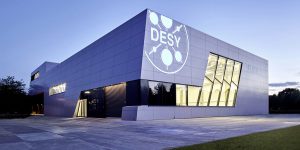 (a phrase from my article, “The Mystery of the Universe We Cannot See” which is planned for the June issue of The Next Truth and written for you to compare it with the latest research findings in Dark Matter and Dark Energy)

“The moment our universe being born was not with a whimper but with a bang and it was gone almost as soon as it happened. At least, that is what you are commonly told. But scientific evidence is slowly building up to support the idea that the Big Bang might not have been the beginning. This well known theory that represents where the laws of physics break down, in where space, time, matter and the energy within began from a singular point, and then expanded and cooled, giving rise over billions of years to the atoms, stars, galaxies, and clusters of galaxies spread out across the billions of light years that make up our observable Universe, is probably wrong according to some scientists.

Have we really being wrong all this time? Have we overlooked the power of an unknown form of energy density which is hypothesized to permeate all of space? Do we need to reevaluate our understanding of our physical world by looking in another direction what speaks of matter and antimatter do, in fact, obey separate laws of physics? To cut this compelling but beautiful picture of approximately 13.8 billion years that still explains so much of what we see, short… maybe we have being wrong about this term ‘explosion’ what suggest that something exploded, or expanded, from one center point outward into space….”

FOLLOW The Next Truth and never miss an issue again!

A FREE digital version of The Next Truth with Print Purchase!

In the March issue of The Next Truth we take an amazing journey through the fascinating world of Kings and Queens from ancient Egypt with Dr. Zahi Hawass, listen to “Time-Researcher” Dr. Marc Wittmann as he weighs in on an astonishing hypothesis on our conscious and how we perceive time, we search for super massive black hole while we peer through the telescopes of MPE’s GRAVITY project and walk side by side with Dr. Brian Sharpless while taking a deeper look on the Symptoms and Features of Sleep paralysis and why it is this tremendously scary.

Also in this issue; A brief introduction about author, journalist and TV personality Nick Pope, Shaman Tony Damian explains which laws govern life in the Universe https://artist.landr.com/music/628810194971, PRI-UK dimensional researchers Nick and Andy are exploring the scientific side of ghostly phenomena, a jaw-dropping neuroscientific idea of a holographic hereafter and medium Kevin Spindloe from Paranormal Research York speaks of how ‘old’ vibrations can open a ‘new’ awareness. 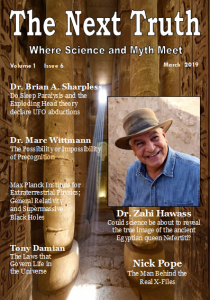 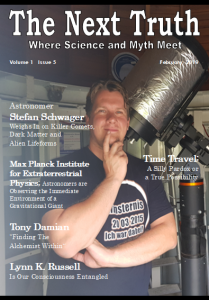 http://www.magcloud.com/browse/magazine/1512517
I hope you enjoy this month’s issue.

“In the February issue of The Next Truth we fasten our seatbelts and travel with the Max Planck Institute for Extraterrestrial Physics to the edge of a galactic black hole, shine a bright light on a cosmic evolution with the director of Riesa’s (Germany) observatory Stefan Schwager, and learn from the publisher of Paranormal Underground Magazine Chad Wilson how the universe provides us what we truly need.

Also in this issue; a mind dazzling theory of how to time-travel with standing waves, chapter IV of the thrilling SF story of Warwick’s physics professor Bill Murray “Death Finds a Way or Mud“, Shaman Tony Damian speaks about finding our true self in chapter IV from his book “Finding the Alchemist Within”, Joseph B.H. McMillan is discussing the existence of God one more time, and author Lynn K. Russell explores our consciousness by leaping into Quantum physics.”

The Next Truth is a young and energetic magazine covering both systems of acquiring knowledge that use observation, experimentation, and replication to describe and explain natural phenomena known as Science and Noetic Sciences, a multidisciplinary field that brings objective scientific tools and techniques together with subjective inner knowing. In other words … Where Science and Myth Meet.

Her contributors are open-minded experts and citizen scientists who show you what it is like to be Alice in wonderland. By combining ‘accepted’ science and the still ‘unexplained events’ in life they let you understand their progressive ideas and groundbreaking experiments in new science and invite YOU into the wonderland of science.

Revealing some of their thoughts and research they discuss various topics like e.g. new laws in Physics, Theoretical Physics merging with advanced Engineering, Theology explained with Particle Physics, the connection between Physical Chemistry and Human Evolution, the purpose of black holes, the Big Bang, and the origin of the Universe we are swirling in.
All with the biggest philosophical question; ‘What if…?!

What to expect? … the most intriguing stories, extraordinary interviews, amazing stories, mind dazzling articles, advanced dimensional research, and much more…

Even new and varied discoveries are leading to more questions and theories each day, the mystery of human consciousness is slowly unfolding… will it reveal the answer to the one question; Where do we come from?

The contributors of The Next Truth, who are by far, our bravest pioneers in this new field of science, are trying to find a plausible answer to secrets, which the Universe is still holding.

“In the January issue of The Next Truth we spotlight the personal experiences of ATLAS Higgs convener Prof. Dr. Bill Murray who was right in the center of the Higgs-boson discovery in July 2012, SETI’s Institute’s weekly radio show “Big Picture Science” in where the host Senior Astronomer Dr. Seth Shostak reveals his thoughts; “Are we truly earthlings?” and… peer into the personal thoughts of Dr. Anindita Bhadra concerning the position of the female scientist.
Also in this issue; Max Planck IPP’s research for a future fuel in plasma’s, a scientific theory of “The Fourth kind” and the introduction of shaman Tony Damian. Michael Murawski weighs in on the German ghost ship “The Renabau”, spiritual coach Jacquelyne Ellis on animal energies in a multi-dimensional universe and author Lynn K. Russell makes an amazing connection between quantum physics and Global Consciousness.”
http://www.magcloud.com/browse/issue/1552089